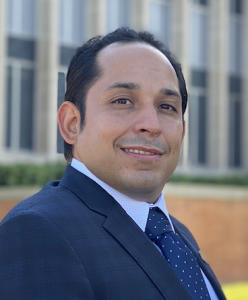 Osbaldo Vela III is a native of Roma, Texas and graduated with a degree in History with a focus in Mexican American studies who has a passion for fighting for civil rights for all minorities.

at the Oil and Gas Negotiation Competition

Currently a rising second year student at Thurgood Marshall School of Law in Houston, Osbaldo enjoys the art of negotiating and showed his skills by earning the title of “Champion” at the Oil and Gas Negotiation Competition.

Known to his family and friends as “Baldo,” he is a barbecue enthusiast and has earned several awards in ribs, brisket and fajita competitions.

Baldo is an avid fisherman and hunter and farms his own vegetables, fruits, peppers, herbs and vines.