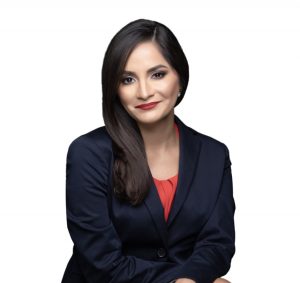 Martie has practiced law for over a decade and began her career as a prosecutor handling a complex felony criminal docket. The youngest and first female first assistant district attorney to serve Starr, Jim Hogg, and Duval Counties in South Texas, Martie was named to the Border Prosecution Unit, a unique group of prosecutors along the border from El Paso to Brownsville.

Martie’s greatest accomplishment to date is her work with child victims. She was awarded the MDT award by Estrella’s House a Child Advocacy Center for her work in bringing together law enforcement agencies, medical providers, social work agencies, and prosecutors to staff cases.

In 2012 Martie formed The Law Office of Martie Garcia Vela, PC. and began her own civil litigation practice which included family law, immigration and other civil matters. She represented several school districts in different capacities and is the former City Attorney for Roma.

Martie is a member of the Diversity in the Profession and Legal Services to the Poor Committees for the State Bar of Texas. She is also a member of the American Bar Association International Human Rights Steering group. Martie is fluent in English and Spanish.