Were You Involved in a Bicycle Accident?

According to information from the U.S. Department of Transportation and the National Highway Traffic Safety Administration, pedalcyclists are bicyclists and other cyclists including riders of two-wheel, non-motorized vehicles, tricycles, and unicycles powered solely by pedals. A traffic crash is defined as an incident that involved one or more motor vehicles where at least one vehicle was in transport and the crash originated on a public trafficway such as a road or highway. Crashes that occurred on private property, including parking lots and driveways, are excluded. Pedalcyclist crashes in the information below exclude bicycle crashes that do not involve motor vehicles. 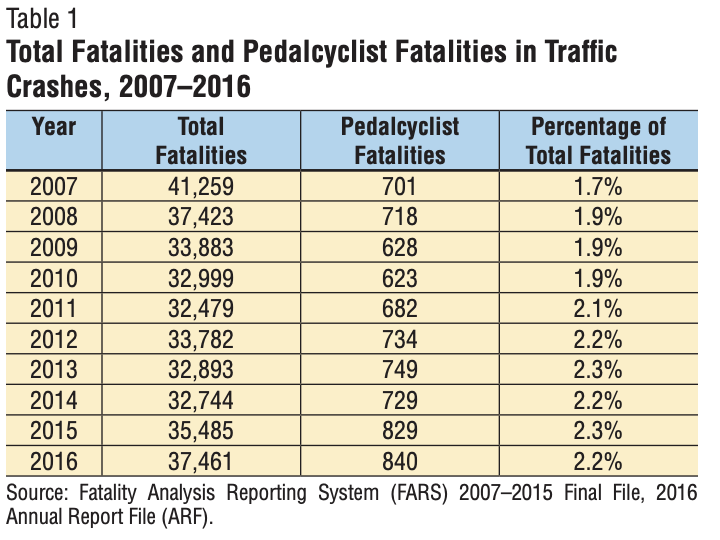 Figure 1 shows information about the settings surrounding pedalcyclist fatalities in 2016: land use, pedalcyclist location, light condition, and time of day and season.

■ Regardless of season, the 6 p.m. to 8:59 p.m time period had the highest percentage (compared to all other 3-hour periods) of pedalcyclist fatalities: 30 percent in winter, 22 percent in spring, 19 percent in summer, and 19 percent in fall. 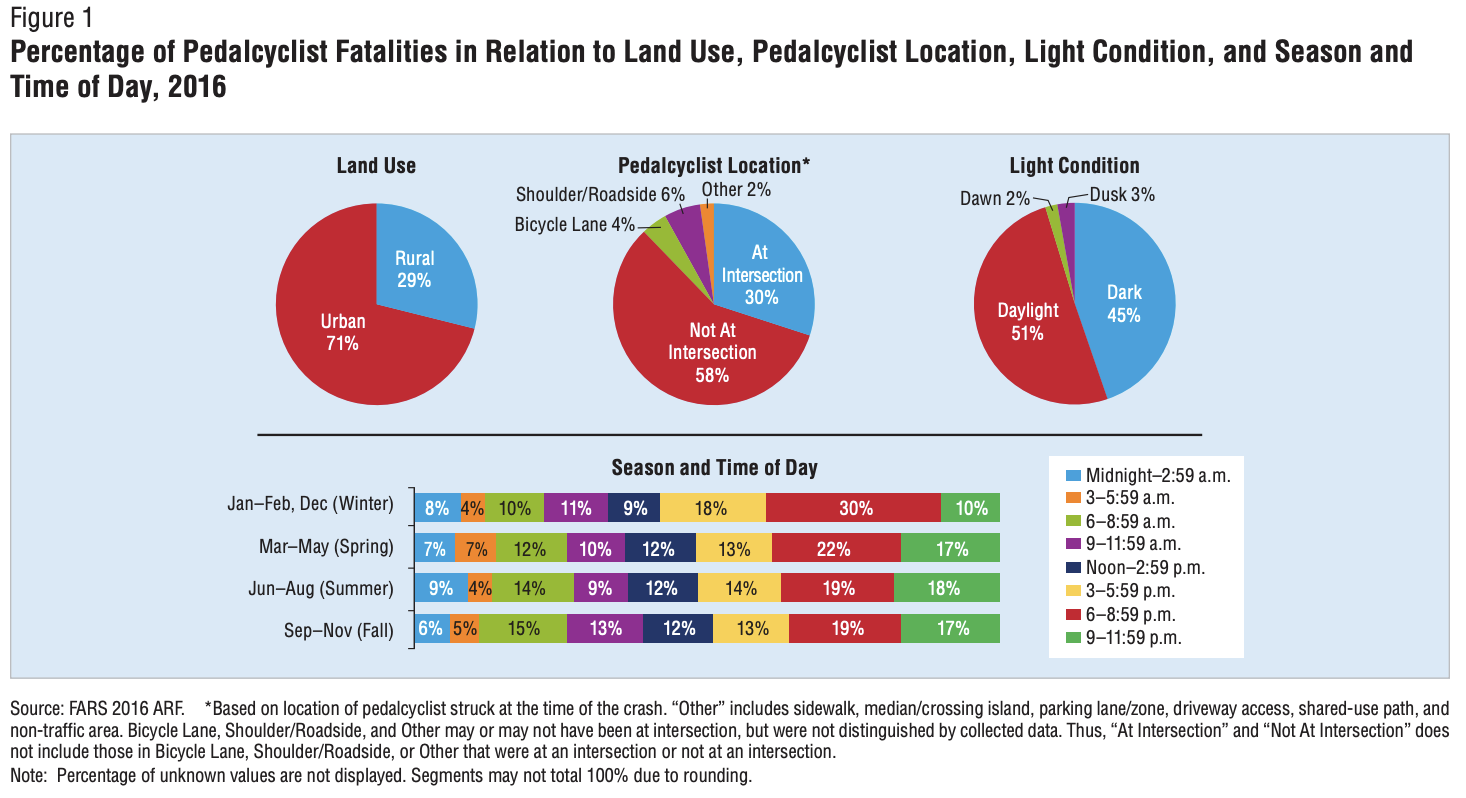 Time of Day and Day of Week

In Figure 2, time of day is divided into eight 3-hour time intervals starting at midnight, and day of week is defined as weekday (6 a.m. Monday to 5:59 p.m. Friday) and weekend (6 p.m. Friday to 5:59 a.m. Monday). To summarize this information concerning 2016 pedalcyclist fatalities: 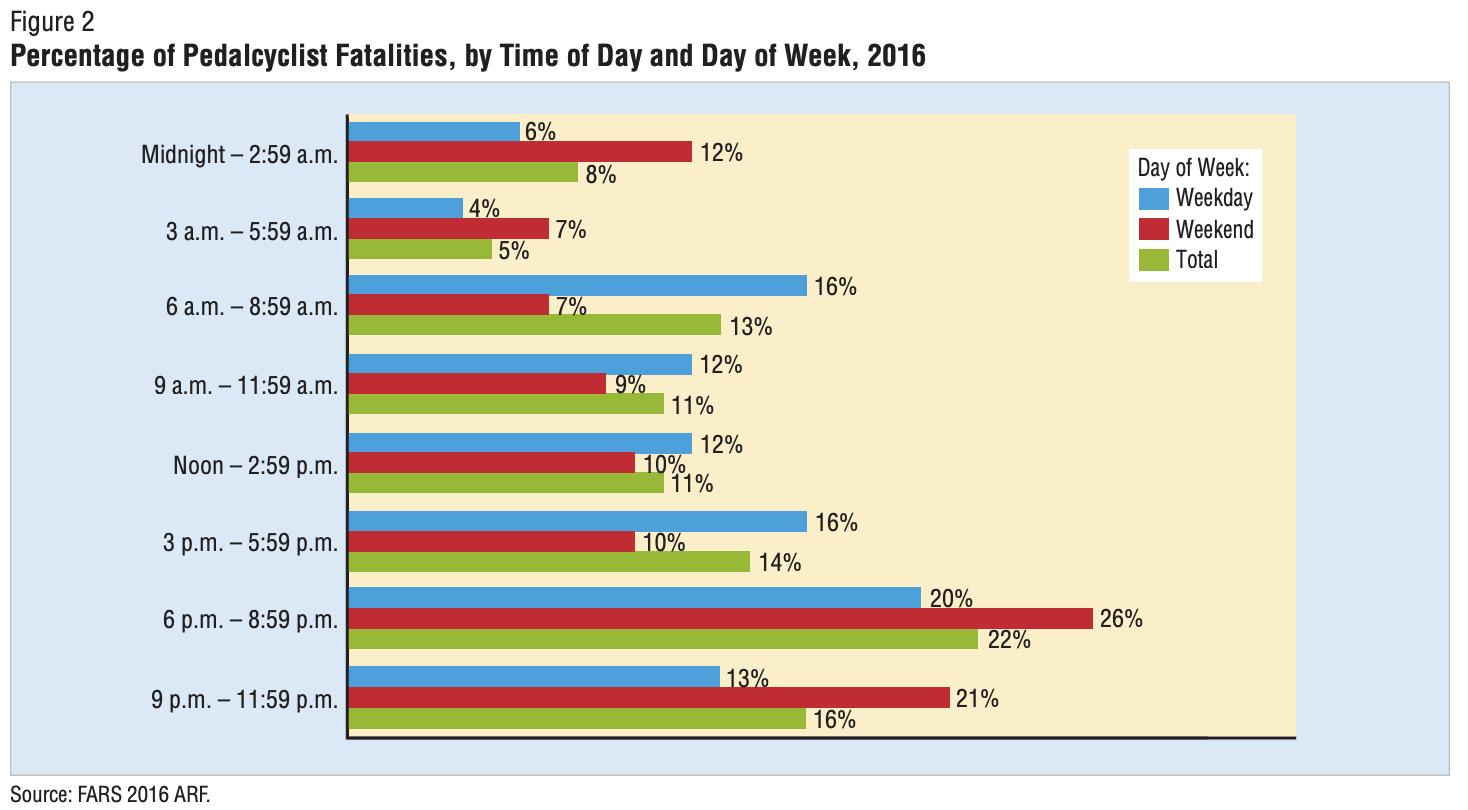 The majority of pedalcyclists killed (84%) in 2016 were males. The largest number of pedalcyclist fatalities were in age groups 50 to 54 and 55 to 59 with 12 percent each.

Children under 15 accounted for 7 percent of all pedalcyclists killed in traffic crashes in 2016. Table 2 groups pedalcyclist killed in 2016 according to their age and gender, and presents population based fatality rates as well. 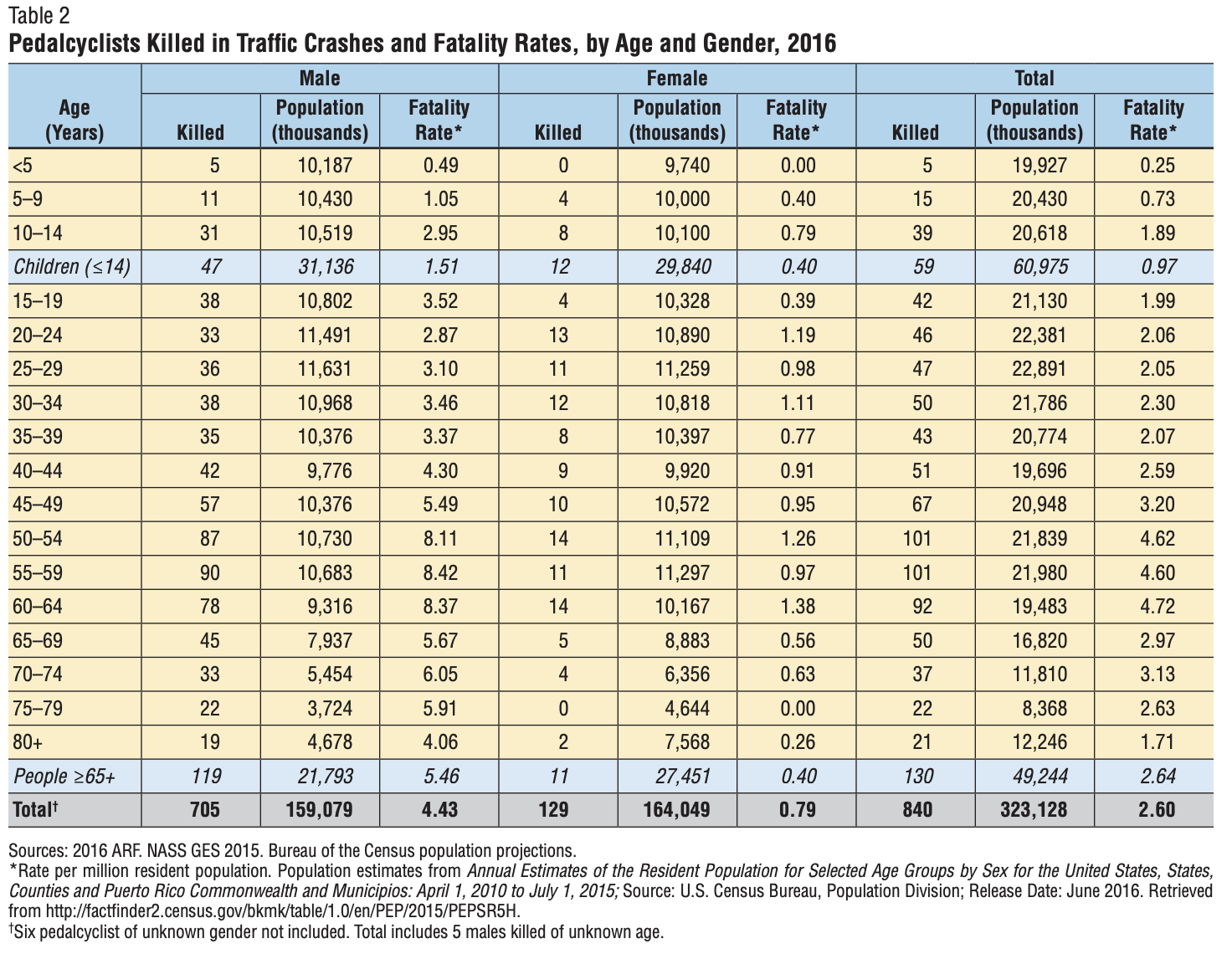 Alcohol involvement (BAC of .01+ g/dL)—either for a motor vehicle driver involved in a fatal pedalcyclist crash and/or the fatally injured pedalcyclist—was reported in 35 percent of the traffic crashes that resulted in pedalcyclist fatalities in 2016 as shown in Table 3 (note that Table 3 contains data about the number and percentages of crashes rather than the number and percentages of fatalities as in Table 4). In 29 percent of the crashes, either the driver or the pedalcyclist (or both) was reported to have BACs of .08 g/dL or higher.

Vehicle Type and Impact Point Table 5 presents the number of pedalcyclists killed by vehicle type and initial point of impact of the vehicle when it contacted the pedalcyclist in single-vehicle crashes in 2016.

■ Ninety-five percent (800) of the pedalcyclists killed were involved in single-vehicle crashes.

■ Pedalcyclists were struck by the front of the vehicle in 78 percent of the fatal crashes.

■ The right side of the large truck was the most frequent impact point, accounting for 22 percent of the fatalities, whereas for passenger vehicles this percentage was 10 percent or less. This could be due to the wide right turns required of a large truck. 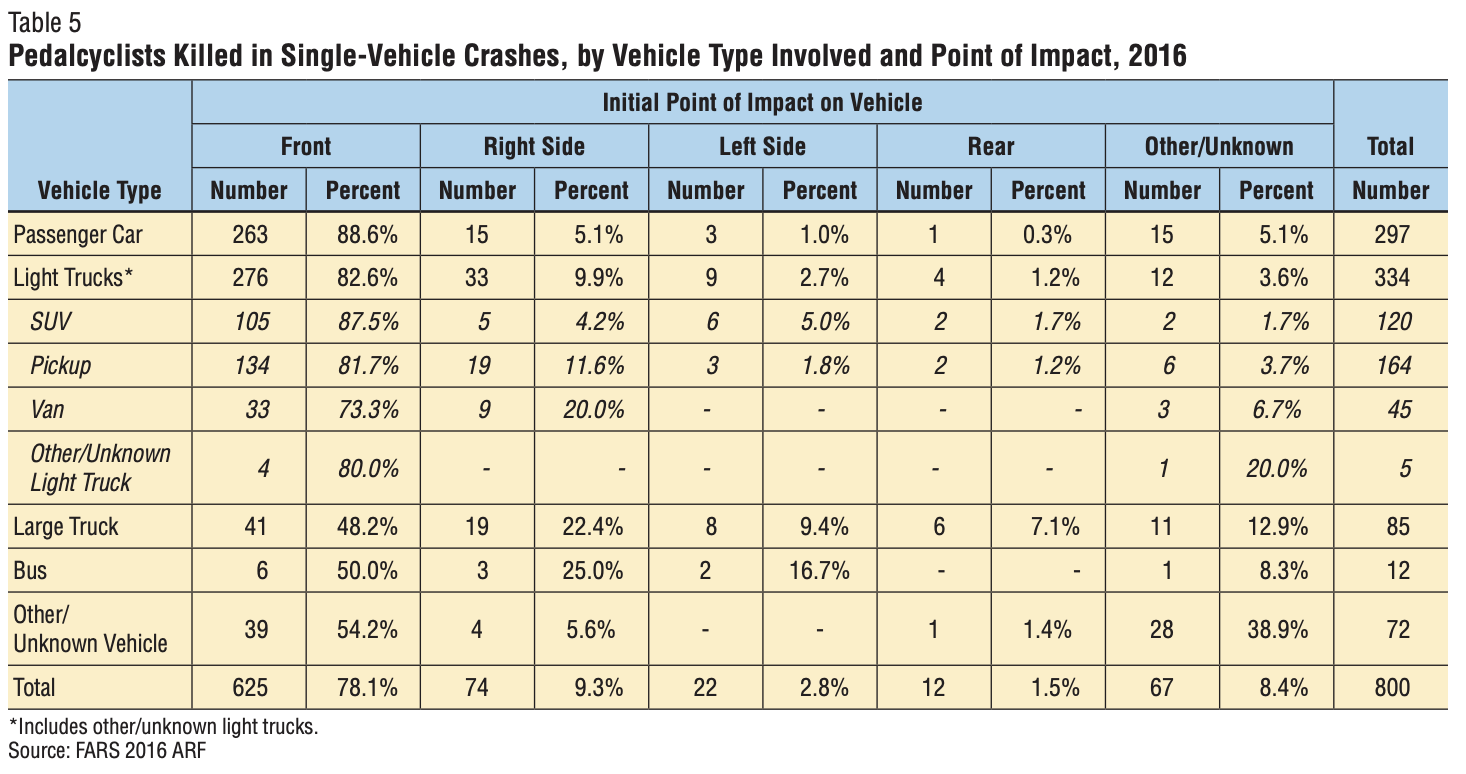 When a decision is made to hire a Bicycle Accident Attorney, the earlier in the process this is done the better (within a week or two of the injury). This gives the personal injury lawyer time to investigate while the facts are fresh and to help make important initial decisions that will affect the case such as which health care providers to consult.

When you need a Houston Bicycle Accident Lawyer, contact

for a free, no-obligation case evaluation.

We serve Houston, the State of Texas and the entire United States.