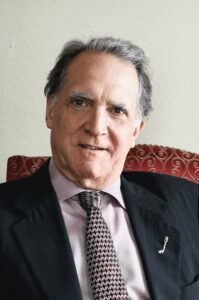 Bringing over 16 years of appellate, pre-trial litigation and State and Federal criminal defense and related litigation to his clients in Houston, throughout the state of Texas and many states across the nation, Clay represents individuals from all walks of life and all types of social, cultural and financial backgrounds. His experience includes both white-collar and blue-collar cases ranging from State misdemeanors to Federal felonies. He has excellent research and complex pre-trial drafting skills as well as electronic case presentation and criminal and civil forfeiture litigation. Clay has litigated to completion over fifty appeals in numerous Federal and State jurisdictions.

Clay has been instrumental in achieving the high record of success Looney, Smith & Conrad P.C. has in winning cases. His appellate work is thorough and successful. “We had a case fought through a motion to suppress and were denied. We fought it on appeal and it was reversed. Our client is a really big guy with a black belt in Karate serving time in prison. We spoke right after it was reversed and when I told him we won, he broke down crying. That was such a memorable moment because it meant he was going home to his family.”

Producing convincing paperwork with outstanding research and writing skills, Clay has many years of experience beginning as a Research Assistant/Editor and Staff Counsel Member of the Texas Criminal Defense Lawyers Association in Austin. Clay was the content editor for the membership journal and prepared and edited materials for fourteen continuing legal education seminars annually. He assisted membership with legal research and drafting and represented the Association before the Texas State Bar, Texas Court of Criminal Appeals and the Texas legislature. Analyses of all Texas bills with criminal law ramifications were drafted by Clay before legislative sessions. He also briefed lobbyists and speakers for presentations before legislative committees. 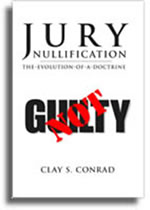 Since then, Clay authored the book, Jury Nullification: The Evolution of a Doctrine where he explores the history of trial by jury and the right of jurors to vote “not guilty” if the law is unjust or unjustly applied. The Founding Fathers believed juries in criminal trials had a role to play as the “conscious of the community,” and relied on juries’ “nullifying” to hold the government to the principles of the Constitution. Clay examines the power of jurors being ignored by American courts to the point that today few jurors are aware that an important part of their role is, in the words of the Supreme Court, to “prevent oppression by the government.”

“This is the most important book on the independence of juries since Lysander Spooner’s Trial by Jury in 1852. It is meticulously researched and balanced. The enjoyment of reading it stems as much from the beauty of Clay Conrad’s writing as from the comprehensiveness of his analysis and the fascinating and important nature of his subject.”
–Randy E. Barnett
Austin B. Fletcher Professor of Law, Boston University

Clay is licensed in Texas and has been admitted to practice before the United States Supreme Court, several United States Circuit Courts of Appeals and the Eastern District of Michigan as well as the Supreme Court of Texas. He is active in many organizations and has authored many academic, professional and general interest publications. As a frequent lecturer, Clay has spoken on topics throughout the country on the subject of juries.

Clay has made extensive continuing legal education presentations as well as presentations to civic and political associations across the country including in Virginia, California, Texas, Mississippi, Oklahoma, Utah and Washington D.C. He has been the guest of many radio talk shows. 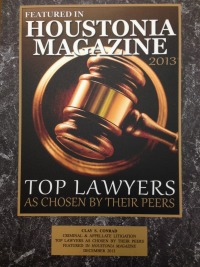 Clay has been named a “Top Lawyer” for 2013 and 2014 in the December issue of Houstonia magazine. To compile this year’s list,  attorneys were rated on a 10-point scale by factoring in peer endorsements as well as experience, education, training, speaking, publishing, and awards.